When I was in LA, on my acting journey, I was fortunate to be a very successful utility stand-in. Meaning, I was the one they trusted to fill any stand-in role. I moved from several shows, one being Desperate Housewives, and then settled in with an amazing crew on the set of Private Practice. (Love shout out to Charli @crazypixie16 and Rhonda @LuvRhondaMari!)

Well, one day, while on location, Tim Daly came up to me and said, “You look like an actress.”

He couldn’t remember her name, but he kept looking at me and saying that he was trying to remember. FINALLY, he ran up to me and said “Vera Farmiga!” Immediately after he told me her name, I heard a yell for second team and honestly half heard him. Since the name wasn’t recognizable to me (at the time) it didn’t stick.

All through out the day, Tim kept asking me to Google her.

“Seriously Karmyn, have you Googled her yet? You HAVE to see a photo! You look JUST like her!”

I had to have him spell her name out and everything. At the time I didn’t have my cool iPhone to quickly search so I had to continue to apologize to Tim while I tried to find a place to plug-in my clunky phone – so as not to lose battery power – and attempt to search Google. I remember Charli and I both attempting an image on our respective ancient devices.

THEN I we saw her! Vera Farmiga!

Seriously! Both Ashley and Vera are just BEAUTIFUL! And I am floored to be in a beauty category that I honestly would have NEVER seen for myself.

A few months after that, Aimee (our amazing P.A.) ran up to me having just seen Up in the Air starring George Clooney and of course Vera Farmiga. She told me that she couldn’t watch the movie without seeing me!

“You DO look like Vera Farmiga! I kept seeing YOU kissing George Clooney!”

Being an actress – looking like another actress – is not the worst thing especially when they are as beautiful and talented as these women!

Here’s what I want to know. What do YOU think? Leave me comments and give me your thoughts! Do I look like Vera Farmiga? 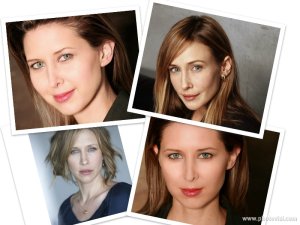