I have not posted since my dad passed. Sorry, I just have not made time for it. But I am starting back up for my niece Molly! 🙂

I always wanted my nieces Molly and Maggie to experience things I didn’t get to at their age. So far we’ve enjoyed Walt Disney World, Universal Studios, Hollywood and Los Angeles! Now….it’s just Molly. So, since Chris and I live in NYC, Molly and my sister Diane get to – for the first time – experience The Big Apple! I’m SO excited!!

Hamilton is the HOTTEST ticket in town and not since Rent has a show made such an impact on the future of Broadway! Molly needs to see this show!

I have instructed them on how to do the lotto: https://hamiltonlottery.broadwaydirect.com/show/hamilton/ so we will be on it like a bonnet!

I’ve not seen the show, but I’ve listened to everything I can online thanks to the Hamilton Website!

Anyway! If ANYONE has any ideas or has at least 1 ticket for my niece in early March, please message me!

It’s the New Year and I like taking January off to assess what needs to happen in the new year! (December has TOO much holiday stuff going on to do that!)

Well…..LOADS going on this year and I’m eager to get going! So in celebration of what’s to come:

Join me and some of the most AMAZING cabaret/jazz vocalists in New York City on December 17th at Don’t Tell Mama as Lina Koutrakos and Rick Jensen present HAPPY HOLIDAYS!

Our Special Guest with be Grammy Award winning singer/songwriter Julie Gold! (song: From a Distance) 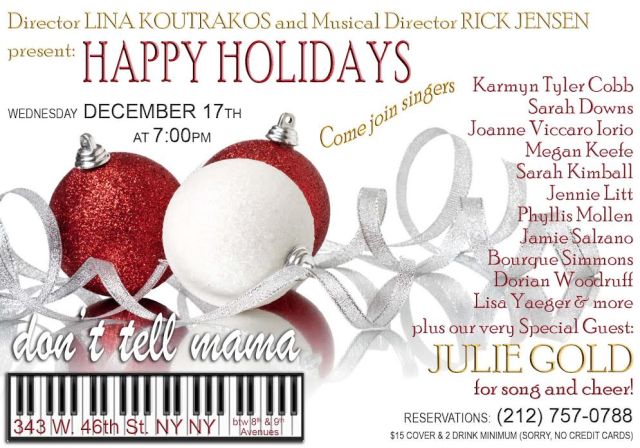 Ok! A few minutes ago my sister texted me that Ty Herndon came out…of the closet! My first reaction? Finally! I can’t count the number of friends (and family members) I have in my life who struggled with their true identity. We ALL know someone.

Now, why should I care that another celebrity came out? Because I was lucky enough to be a dancer in one of videos back in the day! (1999 to be exact!) Were there questions about his sexuality? Yes. Did we care? NO!

All I’m going to say is that he was FANTASTIC to work with! Such a great individual and all-around nice guy! And SO TALENTED!! So to Ty! I’m sorry it took you this long to be comfortable to openly discuss all this, but I wish you even better success in your life and career!!

Here is the first song up from the Diary of Mrs. Cobb. Please subscribe to my YouTube channel for more videos.

I wanted to share my song list from last Wednesday’s show! It went really well! The rain kept some folks away, but the right people were able to be there! 😉 Funny thing, I’m typing this while recovering from a cold! Yes, my husband came home 3 days BEFORE the show with a nasty cold and was worried I’d catch it. Well, my body wouldn’t let me catch it until 3 days AFTER the show! (Thank you Jesus!) This weekend was rough but thankfully I taught online lessons yesterday…that kinda virus can’t spread over the interwebs!

I am VERY excited to see the show myself! 🙂 My parents were not able to be there, so we decided to record it, and thankfully the fantastic Jim Vern was able to film it for us!!! WOOT!!!

The show is about coming to NYC. From the time I saw my first Broadway show in 8th grade, pageants, learning the songs that shaped my love of music, moving to Los Angeles, marrying and moving to Manhattan. It ran a little over time, but we will know for next time!!

The AWESOME thing is this: I now have a show that can run again for people to come to see! A dream come true for me!! My goal for the next show is more instruments: bass and drums specifically! 😉 A few more…special plans in the making too, but I can’t share until I’m 100% sure!! Thank you Daryl Kojak in advance!!

One theme that was prominent throughout the show was my amazing mother who had NO clue she was encouraging me to fall in love with American Songbook songs! A gift that I will be FOREVER grateful for!! If you don’t already follow my Mom’s Facebook…well you should! She’s a funny, loving, God-fearing woman who loves her family and loves helping people!!

Question for you: What songs would YOU like to hear me sing?

Tickets are now available! Get $5 off when you use Promo Code: online
Excited to share this show with you!!

Check out my AMAZING pianist Daryl Kojak! We’ve got some AWESOME things lined up sure to dazzle and delight!

Former Miss Louisiana sings songs that help tell the juicy secrets and jaw-dropping stories of her life in pageants and being on the set Desperate Housewives!! 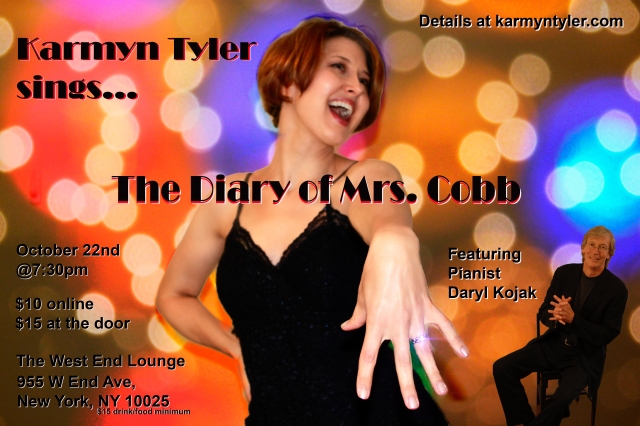